South Padre Island Attractions and Events for Your Vacation

South Padre Island has much more to offer than just surf and sand. Check out Schlitterbahn Beach Waterpark, the Point Isabel Lighthouse in nearby Port Isabel, the SPI Nature Center, local museums and more.

Sea Turtle, Inc. was founded in 1977 by Ila Loetscher, better known as “The Turtle Lady of South Padre Island.” STI was formed to aid and assist in the protection of Kemp’s Ridley Sea Turtle – and to ultimately restore the ridley population to a level that will ensure its survival.

Through the years STI has expanded its scope to actively support the conservation of all marine turtle species. To achieve its goals, STI provides educational programs to schools, tourist bureaus, civic organizations and new media.

One of the top waterparks in the country, South Padre Island’s Schlitterbahn Beach Waterpark is located right on the beach and offers a wide variety of waterslides, rides, pools and other ways to ‘get wet.’ Schlitterbahn Beach also features a restaurant, sports bar and evening entertainment during the summer season.

Offers a fun dining experience with spectacular views of the Gulf of Mexico and Laguna Madre. Open 4 pm-10pm Monday – Friday and 11 am –

At the northern end of the South Padre Island town limits. Travel north on Park Road 100 to the South Padre Island Convention Center. Next to the convention center is the popular Laguna Madre Nature Trail, a must for nature enthusiasts and bird watchers. Across the road from the convention center are the parks day use facilities. Completed in early 1994, these include two beachfront picnic pavilions, umbrella and boogie-board rentals, concessions, a unique children’s playground, shower facilities and a ranger station.

Ask the Andy Bowie manager about group rental facilities for private beach parties. Further north in the park you will find horseback riding and a beachfront access road which opens up twenty miles of drive on the beach for the more adventurous. On the bay side of the park, you’ll find popular spots for windsurfing and wade fishing. Entry $4 per vehicle.

The tiny town of Port Isabel in Deep South Texas is steeped in history. As one of Texas’ oldest towns, Port Isabel served as a strategic port during both the Mexican-American War and the Civil War. Today, the Museums of Port Isabel celebrate and spotlight the area’s rich history.

Over the years, the Rio Grande Valley has played an important role in Texas and US history. Palo Alto Battlefield, just north of Brownsville, was the site of the first battle of the US/Mexican War in 1846. Today, Palo Alto is open to visitors as part of the National Park Service.

Located at the tip of Texas, in the border city of Brownsville, the Gladys Porter Zoo has long been recognized as one of the nation’s best zoos. Easily one of the most popular attractions in South Texas, Gladys Porter Zoo attracts nearly 400,000 visitors on an annual basis.

Located a short drive from South Padre Island, Laguna Atascosa National Wildlife Refuge boasts half a dozen trails on which visitors can view an amazing variety of bird and animal life, including the reclusive Ocelot.

On the southernmost tip of South Padre Island, is the crown jewel of the system. Over one mile of clean, white beach along the Gulf of Mexico offers abundant waterfront recreational facilities, and our beachfront facilities make the clear gulf waters accessible to all. Enjoy our picnic and playground areas, the south fishing jetty, restaurants and clubs, Sea Ranch Marina, U.T. Pan American Coastal Studies Laboratory exhibits, and the Chapel By The Sea non-denominational church. 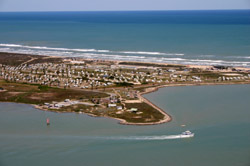 There is also a full service marina with daily charters, the world renowned Schlitterbahn Beach Water park South Padre Island, and a boat ramp. Support facilities include a laundry and retail shops. New webcams with live views of the beach. With nearly 600 R.V. spaces, we are not only one of the biggest parks in Texas, but also the best! Popular jetty fishing and surfing area. Entry $4 per vehicle before 5pm, $2 after 5pm

Next to the Convention Centre and Whaling Wall No. 53, the Laguna Madre Nature Trail is a 1,500-foot boardwalk that extends across four acres of wetlands. Containing informative signs about dune systems and bird species that frequent the area, the nature trail provides visitors with the opportunity to observe many species of birds and other wildlife in their natural habitat.

The idea of the Laguna Madre Nature Trail was conceived by naturalist Ed Hawkins. It is dedicated to his memory. Both the Whaling Wall and nature trail are always open to the public free of charge and can be accessed through the circle driveway leading up to the Convention Centre. The South Padre Island Convention Centre is located at 7355 Padre Blvd. at the north end of town.

Anytime is the time to visit Texas’ top beach, South Padre Island. Besides beautiful stretches of sand, and an array of impressive restaurants, SPI offers visitors a host of outdoor activities during the summer months. And even better deals in the off season. Enjoy our top ten list of things to do!

Go on a Dolphin Watch

Ride a Horse on the Beach

The South Padre Island Golf Club winds along the placid Laguna Madre bay with spectacular views of the Island. It’s no wonder that it was selected as one of the Top 20 news courses in America by Golf Magazine when it opened in 1997. Each hole offers unexpected challenges just minutes from South Padre Island in Laguna Vista. The 18-hole, par 72 course is complemented by a 385-yard driving range, putting and chipping greens, pro shop and clubhouse.

The Laguna Madre Bay separates South Padre Island from the Texas mainland and is recognized as one of the world’s top windsurfing destinations. The sailing season off South Padre runs from September through May. Water depth varies from three to five feet, daytime winds average 18 mph, and the average yearly temperature is in the 70’s. Novices and pros come to sail the bay, the Jetties, Boca Chica, and the Ditch, site of some of the fastest windsurfing speeds in North America.

Kiteboarding is fast becoming the hottest new water sport and South Padre Island offers year-round, world-class kiteboarding conditions. consistent winds offer beginner to expert riders near perfect flat-water conditions to hone their skills. Advanced kiteboarders will enjoy riding the Laguna Madre and the waves of the Gulf of Mexico. Experienced, certified instructors are available to teach you about this exciting sport. For the fun of it call South Padre Kiteboarding.

South Padre is not Padre Island 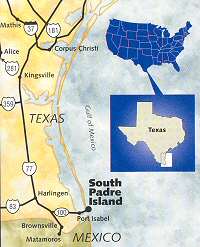 So don’t be confused.  Look at a map and get your facts straight.  Don’t say, don’t confuse me with the facts!  Have the facts!  I hope this clears up the distance between the two Islands.  They are most definitely two separate places many miles apart and that is about a 2 ½ hour drive!